For the month of February, one of the Blogging Marathon theme was ingredient swap. One of the ingredients I got was bulgur wheat from Pavani . I had prepared lentil kofte (or a version of it since I was short of all the supplies except bulgur :D), but I still had enough to try some other recipe.

A generic search for vegetarian bulgur recipes landed me on this page and I was absolutely taken in by their baked version of potato kibbeh.  With pictures as good as theirs and clear step wise instructions, it was almost a crime not to prepare it :-)). Though I made it long before, it has been staying in the drafts section for way too long. Since this month’s theme is protein rich foods and this recipe has bulgur, chickpea and spinach as sources, it time for this recipe to join the virtual world.

Kibbeh is a Middle Eastern dish prepared with bulgur and mostly meats. There are many variations to the dish right from shaping it to the method of cooking. It can be deep fried, baked or served raw and is shaped as a ball, patty or scored into diamond shapes. You can read more about this dish here.

Read on for the recipe and pictorial. 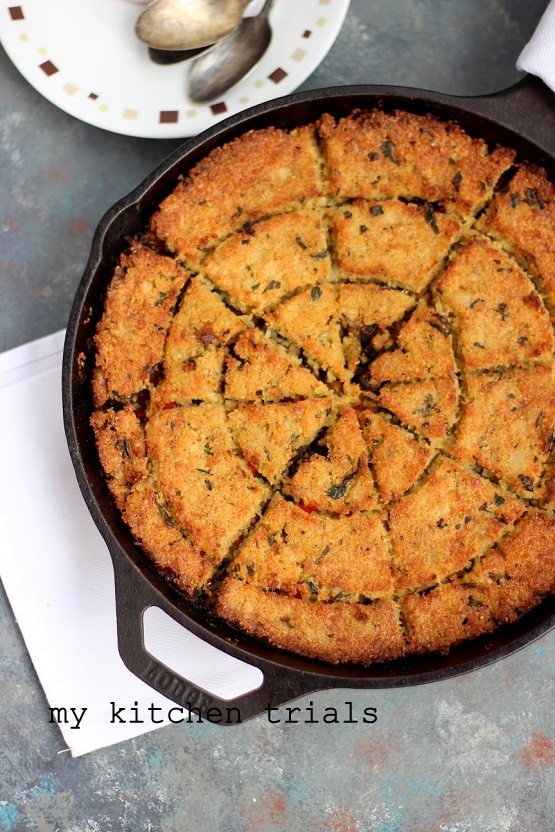 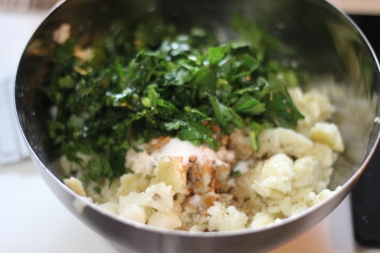 Soak the bulgur in lukewarm water for 20 minutes. Drain and set aside. Cook the potatoes separately. Once its cooked, add to a bowl and mash well so that no lumps remain. Add the grated onion, salt, pepper, allspice, cinnamon, parsley and drained bulgur. Mix well using your hands until everything is uniformly spread. It will come to the consistency of a dough finally. 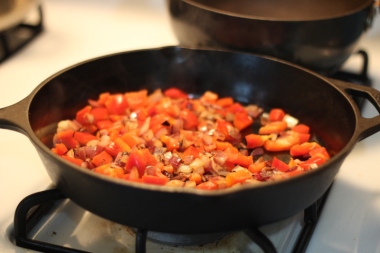 For the filling, heat a tablespoon of oil in a pan. Saute one big chopped onion and one each red and orange bell pepper. Add salt and pepper to taste. Now add one cup of cooked chickpeas and 2 cups of spinach. I have used a small pack of frozen spinach here. 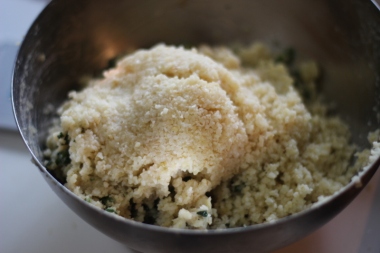 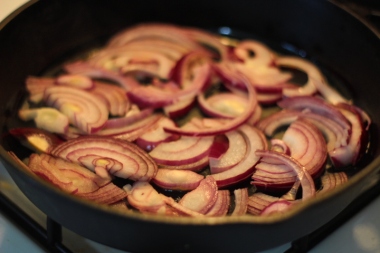 Add the bulgur to the potato mix and mix everything well. Divide this bulgur potato ‘dough’ into two parts. In a baking pan, spread one tablespoon of oil. Spread a layer of thinly sliced onions from one large onion. 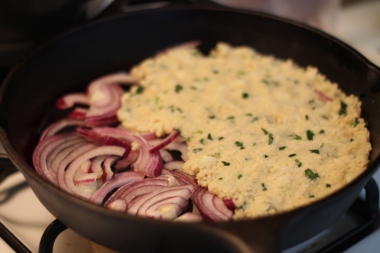 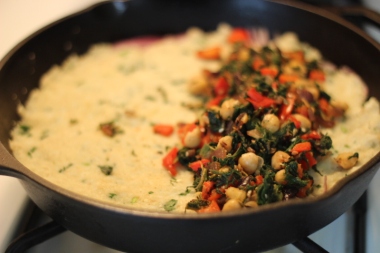 Once you have covered the entire surface with the filling, add the rest of the bulgur dough evenly on top of the filling. Cover it completely. 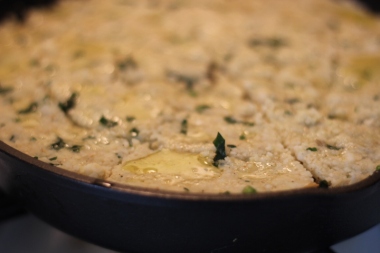 Using a knife, score whatever patterns you want into the dough. The knife scoring go all the way down to the bottom of the dish. I cut it into wedges and then made not so deep circular patterns on top. Spread 1/4 cup of olive oil on top evenly and bake in a preheated oven for 40 -50 minutes at 400F. If the top is not browned at the end of that time, keep under broiler for a couple of minutes. Take off the oven and cut into slices once its cool enough to touch.