Rajasthan, the desert land, is a beautiful state with a colourful history behind it. It is the land of ‘Rajas(kings)’ (Raja-sthan) and there are many palaces and fortresses there, reflecting the state’s rich royal heritage.

Travelling to Rajasthan was a dream and we did travel to Jaipur and Jaisalmer 8 years back. It’s still an experience I relive and relish, especially the Jaisalmer fort. If possible, I would love to go there again…and again….and again

Not just the palaces, Rajasthani food is also famous. Their cooking style is a bit different. They bank on pulses and dried vegetables more than fresh veggies, since the desert is no ideal place to grow vegetables. It’s all different with advanced irrigation techniques and easy transportation now a days.

Yet you will find extensive use of pulses in Rajasthani cooking.

We had been to Choki Dhani,  a Rajasthani village resort which showcases food and art culture from Rajasthan. We went as a group and so had fun. The place was over crowded and the waiting time for each and everything was long, but since we were a big group, the waiting time was yacking time and hence a happy time as well :-).

My son enjoyed the trip a lot (‘a lot’ is really less to describe his happiness) and surprisingly, loved the food also a lot.

He finished almost everything on his plate, without much fuss. He was hungry and the food was tasty.

The menu I have here is a bit on the lines of what we had in Choki dhani. They served us phulka, puri and bajra roti…all of which my son loved. I have replaced the puri with missi roti.

They started off with churma and brought the dal and baati. Then came the kadi and gatte ki sabzi. I skipped the last one, it deserves a separate post on its own :-). There was palak paneer and an aloo ki sabzi to go with the rotis. Some 3-4 varieties of pickles and chutneys were served.

Kichidi came later and it was served with sugar. Keeping the Chennai crowd in mind, they have included rasam, sambar rice and curd rice in the menu as well.

So here I have 3 bread varieties, an aloo curry and a mixed veg curry to go with it. Kichuri, dal and kadhi with 2 types of pickle/chutney as well. 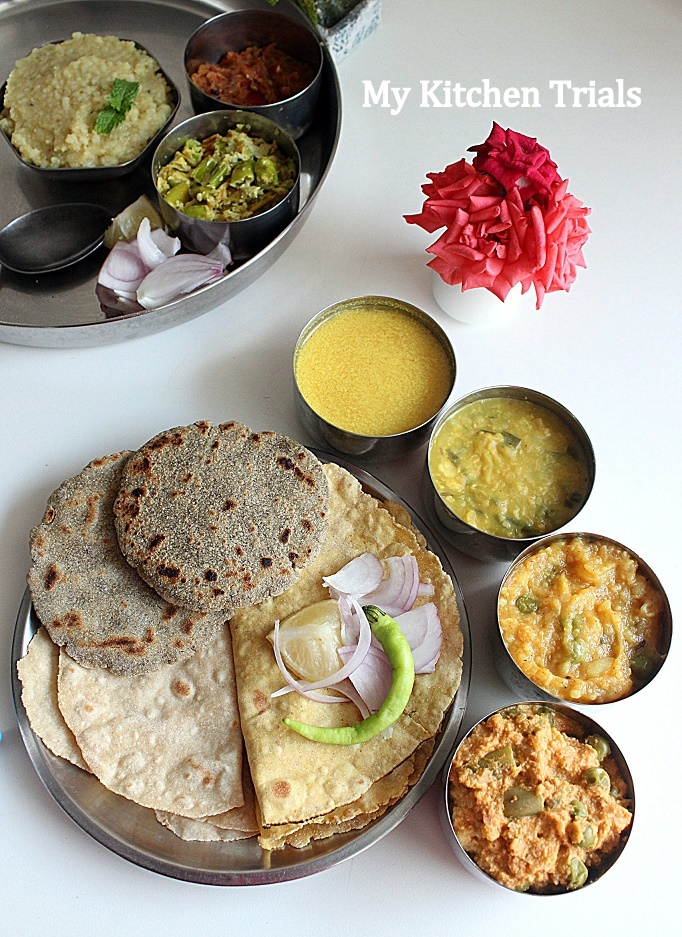