T is for Thenga, coconut. T is also for Thiruvathira Kali, a dance form, performed at the time of Onam (mainly in Central and Northern Kerala). I didn’t have any pictures to share about thiruvathira kali, so T is for Thenga, today.

Coconut has a very special place in Kerala, especially in cooking. A good amount of dishes require a bit of coconut in some or the other way. Even payasams are made with coconut milk.

A little coconut oil is applied to the hair before taking bath everyday. For wounds, my first aid is lots of love and a bit of coconut oil.

For cooking, everything from the tadka to deep frying is done with coconut oil.

Coconut flesh is scraped out of the shells. For this, we have something called ‘cherava’, but now a days a lot of people just cut out the flesh and pulse it in the mixer.

Scrapped coconut pulsed a bit with chillies finds it way into the umpteen variety of thorans.

Coconut ground into a coarse paste is used for avial and koottu (Semi gravy dishes).

Coconut is sometimes roasted and then ground for some kind of sambars like theeyal. Roasted coconut is also used as garnish for Koottu curry and erissery. 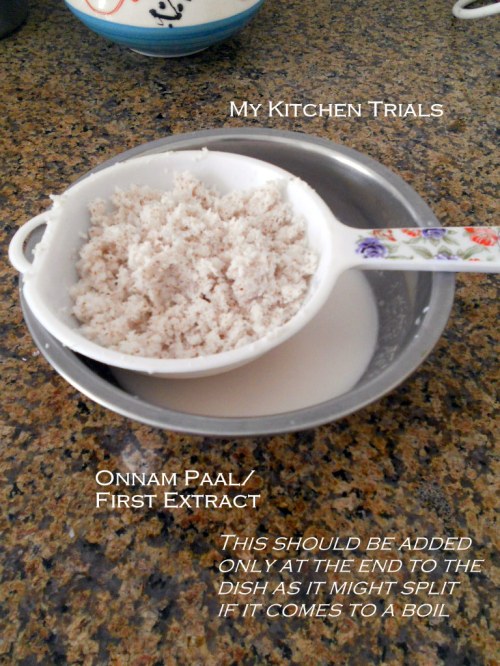 Coconut milk is used in many jaggery based payasams. The ones that are in the blog would be

Coconut milk is also used for savory dishes like Olan and Vegetable Stew.

Sometimes people add cococnut milk to biryanis and say its Kerala style, but I haven’t had one till now in Kerala.

When preparing for a sadya, the first thing to do is to buy coconut. For my spread, I bought 2 whole coconuts and a pack of ready made coconut milk.

For payasams, if you use the ready made powder kind, it lends a funny taste to the payasam (- that’s experience talking). The tetra pack is much better, but the best is of course, making from scratch.

I made coconut milk from scratch for the Ada pradhaman, Chakka Pradhaman and Gothambu payasam. I was smart enough to document the evidence as well. So here we go… 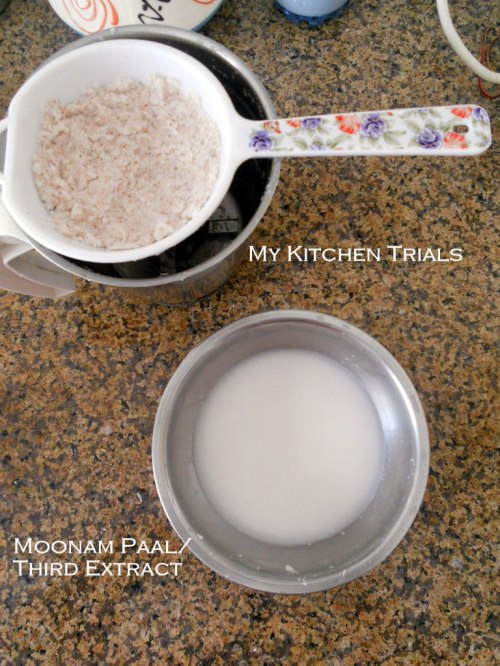 For extracting coconut milk, you obviously need coconuts, but you need some patience as well. The cleaning up of the kitchen counter is the worst part. So its no wonder that tetra packs are so popular. 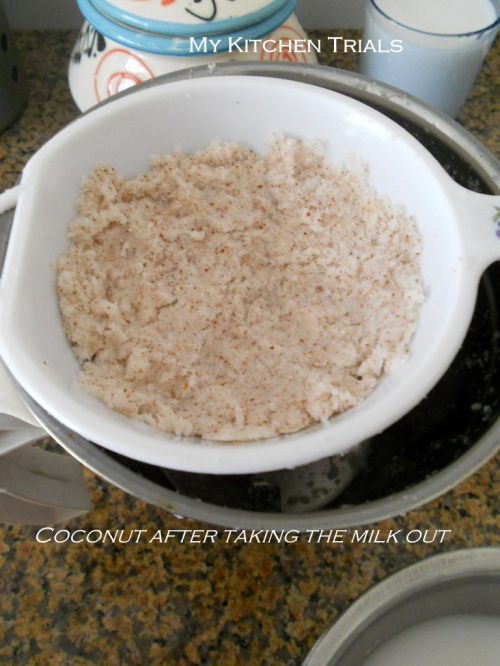 Things to keep in mind when using coconut milk:

Or else, go for the shortest method – not for payasams, though…