The legend goes that Kerala was ruled by the king Mahabali. He was an asura, but he was fair, wise and a great ruler. People lived happily under him – there was no caste discrimination, no crime, no corruption. But Lord Indra- king of Devas, was worried that Mahabali would come after his throne, approached Lord Vishnu to rescue from the imminent danger.

Lord Vishnu, took the shape of a small brahmin boy (Vamana avatar). He requested Mahabali for grant of land, as much as he can cover with three steps. The king granted the wish and soon Vamana grew big in size. With the first step, he covered the earth and the underworld. With the second he took the entire heaven.

And for the third, nothing was left.

The king, realizing that Vamana was no one other than Vishnu himself, offered Vamana to keep the third step on his head. Vamana, happy at Mahabali’s devotion, told him he can ask for a boon.

Mahabali wanted to come and see his subjects once in an year, to see how they are doing. The lord granted him this. And then Mahabali was blessed and raised to heaven.

Mahabali visits Keralam for Onam and the entire state gets ready to greet its ruler.

Like the English calender, there is a Malayalam calender as well. The Malayalam months have 30 days. And there are 27 stars or nakshathrams. Each day of the month represents a specific star (nakshathram).(When a baby is born, the Malayalam month, the day, the star under which he/she is born and the time is noted to write the child’s horoscope. )

Mahabali was granted his wish to see his subjects in the month of Chingam, on the day of Thiruvonam.

Pookalam (floral arrangement – floral carpets) are done in households to welcome the king. As you can guess, I don’t do any of that, but luckily, I have friends who still do all this :-).

So the picture above is from my friend’s place and she has given me permission to click and share her pookalam for the next ten days. 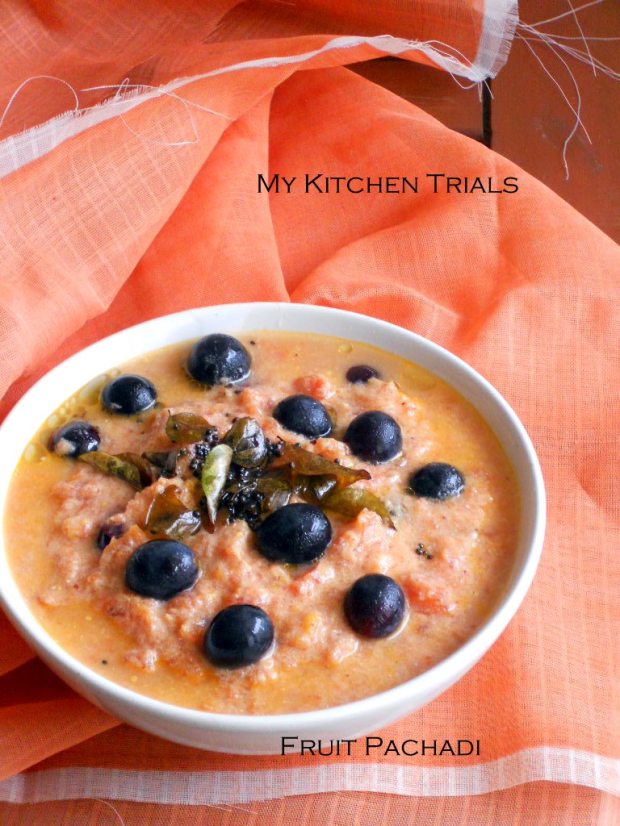 So with the countdown to Onam beginning today, lets get to some dishes/recipes.

For the letter F, its a fruit pachadi. Its also called Mathura (sweet) pachadi and is usually a mix of pineapple and grapes. Mangoes and bananas are also added, but I was out of all that except grapes and papaya.

So a papaya fruit pachadi it is! 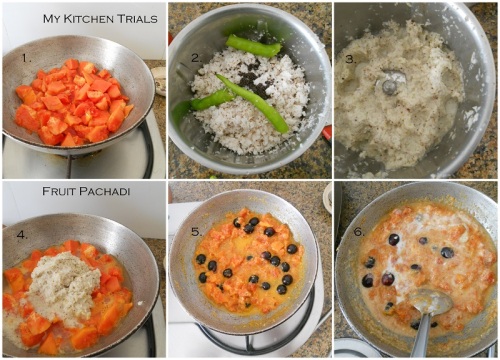 Linking this to Valli’s Side Dish Mela too.